You undoubtedly associate candy maker Milton S. Hershey with the Great American Chocolate Bar, but did you know that he created hundreds of jobs during the Great Depression? Hershey’s “Great Building Campaign” not only strengthened the local economy during a nationwide crisis but left us with some of the town’s most iconic and historic buildings, including The Hotel Hershey® and Hershey Theatre.

The Great Building Campaign & Mr. Hershey’s Love For His Town

When asked what it was like in Hershey during the Depression, locals remarked, “What Depression?” Amid the fallout from the stock market crash in 1929, Hershey’s chocolate company continued to see comfortable sales and profits due to the affordability of his candy bars and products. More importantly, Mr. Hershey cared deeply for his town and all the people in it. With the low-cost building materials and available workforce, Milton Hershey gave 600 construction workers a new purpose and food on their table.

“Mr. Hershey watched intently as two huge steam shovels tore apart the earth. His foreman told him, ‘These machines do the work of 40 men." And Mr. Hershey simply replied, ‘Take them off. Hire 40 men.’

The Hotel Hershey, opened in 1933, is one of our region’s finest hotels, but for Mr. Hershey, it was the crown jewel of the attractions and amenities he built in the town of Hershey. Mr. Hershey’s travels around the country and abroad inspired its design. The idea for the Hotel’s exterior came from a small 30-room Mediterranean hotel on the water where Mr. Hershey stayed. His hotel would have 170 rooms and sit atop Pat’s Hill overlooking the town of Hershey instead of the sea.

There are touches of Mr. Hershey’s worldly influence throughout the building. Inspired by Mr. Hershey’s second model town, Hershey, Cuba, and the beautiful sights he saw while traveling Europe, the Fountain Lobby features Spanish architecture that resembles an outdoor courtyard patio with a water feature and sky-like ceiling.  While you’re enjoying a Hershey’s Signature Chocolate Martini in the Iberian LoungeSM, observe its Spanish motif, including lush carpets, comfortable chairs, cozy fireplace, oak columns, and an original mural depicting a waterfront scene.

The Hotel Hershey has several world-class restaurants, including The CircularSM dining room. Mr. Hershey, who often dined alone on his travels, resented having to dine in a corner. When designing The Circular, he insisted that his restaurant have a round shape without central pillars or obstructions. This way, all his guests could have a good table.

Take a Tour: The Hotel Hershey offers free historic tours every Monday, Wednesday, and Friday at 10 AM. Groups of 8 or more, please contact the Hershey Community Archives.

In 1915, Mr. Hershey had his architect draw up plans for a community building and theatre, but it wasn’t until 1928 that Mr. Hershey dusted off the sketches, and workers broke ground.

The interior design of the Hershey Theatre evokes an early twentieth-century opulence, with an elegant grand lobby and a romantic, European-inspired opera house. Upon entering the lobby, you’ll find polished Italian lava rock floors, marble walls, and a ceiling mural depicting Greek gods, chariots, wheat, beehives, and pastoral scenes. In the back of the house, don’t forget to look up at the shimmering, intricate gold mosaic made of hand-placed tiles that took two years to place.

Inside the 1,904-seat auditorium, its pink granite walls resemble marble blocks and a suspended atmospheric ceiling makes you believe you’re outside in an Italian plaza. The symbol of the Hershey Theatre is a lion, and you’ll find 25 lions (some obvious and not so obvious) all around the room. The Hershey Theatre also has a rare Aeolian-Skinner concert organ with 4,715 pipes and 25 bells that are used for special performances.

According to lore, Mr. Hershey’s favorite seat in the Hershey Theatre was Row T, Seat 27. Row T was known as “King’s Row” because it was the first row with a gentle slope, allowing guests to see over the person in front of them. He preferred to sit on an outside aisle seat near the door so he could step out to smoke a cigar during intermission and leave as soon as the performance concluded.

The Theatre opened in September 1933 with a movie showing of Pilgrimage. Throughout the 1930s, the venue was a regular stop on the vaudeville circuit, a variety show act that was the primary form of entertainment for the time. In the 1940s, the Hershey Theatre showed first-run pictures and welcomed touring Broadway companies.

Over the years, the Hershey Theatre grew in popularity with Broadway shows and welcomed some of the best entertainment stars, symphonies, choirs, dancers, and performers of the day. Just one look at their entertainment line-up today shows this tradition hasn’t wavered.

Take a Tour: The Hershey Theatre offers Spotlight Tours on Fridays at 11 AM (year-round) and Sundays at 1 PM (Memorial Day through Labor Day) for $6 (ages 3-12) and $10 for adults.

Hershey residents love hockey today as much as they did in the 1930s when the demand for seats at the former Ice Palace necessitated Mr. Hershey to consider a new, larger structure. What resulted was the Hersheypark® Arena, an innovative engineering marvel built in 1936 as the first large scale barrel shell roof structure in the country.

The Arena served as the home ice for the Hershey Bears®, the longest consecutive running hockey club in AHL history. The venue itself often hosted the AHL Calder Cup championship games, where the Bears skated to victory 11 times over the team’s history.

In addition to ice skating shows like the Ice Capades and Disney on Ice, the Arena was a multi-purpose performance and sports venue, welcoming circus performers, musicians, tennis matches, and basketball games. At the Arena in March 1962, Wilt Chamberlain scored 100 points in a single basketball game resulting in a record-setting moment that has yet to be beat.

In 2002, Hershey opened the Giant CenterSM, with expanded seating, luxury boxes, and player facilities, that replaced the Arena as the area’s preeminent sports and entertainment venue. The Arena is still an essential part of Hershey’s recreational facilities, hosting youth games and the occasional Bears practice.

Hersheypark® Stadium was the last structure of Mr. Hershey’s Great Building Campaign, and its purpose was to further develop the Hershey area as a sports center.

The structure opened in spring 1939 and hosted professional, collegiate, and high school football teams. Many Hershey residents fondly remember when the Stadium was the summer training camp for the Philadelphia Eagles. Fans watched practice, waited outside for autographs, and interacted with the players who made use of the town’s recreational facilities. In 1958, the first Big 33 game, a beloved tradition featuring the region’s best high school players, was played at the Stadium.

In addition to sports, cars took the field. In the early days, the Stadium hosted Midget Auto Racing, a fan-favorite until the gas rations of World War II rendered it too expensive. The first AACA Antique Automobile Show was held in 1954 and has since expanded into a multi-day show that takes over the parking lot of the Giant Center.

In the 1980s, the Stadium’s capacity for 30,000 fans allowed it to become a tour stop for rock bands. In 2019, Hershey Entertainment & Resorts erected a new stage featuring a wider and deeper performance space, which has attracted a number of big-name performers for its 2020 season.

In addition to the structures of his Great Building Campaign, Mr. Hershey left a lasting legacy throughout the town.

Visitors who are fond of horticulture and botany will want to explore the Hershey Gardens, a 23-acre public garden next door to The Hotel Hershey. J. Horace McFarland of Harrisburg wrote to Mr. Hershey, advocating that he invest in a public rose garden. It just so happened that Mr. Hershey was thinking of expanding the rose garden at his home, so the timing of McFarland’s idea was perfect. In November 1936, 12,000 rose bushes in 450 varieties were planted, and the Gardens opened in June 1937, welcoming more than 200,000 visitors in its first season. Today the grounds of the Gardens include themed gardens, a children’s area, an educational wing, and a tropical Butterfly Atrium.

As part of Mr. Hershey’s grand plan for his chocolate factory and model town, Hersheypark® was in the works as the factory itself was under construction. Its original facilities included picnic pavilions, slides, swings, see-saws, a dance pavilion, a baseball diamond, and lighted walkways and structures powered by the chocolate factory next door.

In 1975, Holiday Magazine named Hersheypark the cleanest and greenest amusement park in the United States. Today, Hersheypark continues to expand its rides and entertainment with the recent addition of an 11-acre water park and Hershey’s ChocolatetownSM, an all-new area, including shopping, dining, and new coaster, coming in summer 2020.

Besides the squirrels and birds, the first animals to take up residence at Hersheypark were 12 prairie dogs sent to a local man, Franz Zinner, by a former neighbor. Unsure of how to take care of these exotic gifts, Zinner reached out to Milton Hershey, who agreed to keep them as a park attraction. When Zinner’s generous friends sent him a black bear cub, Zinner and Hershey conceived an idea to build a zoo.

During Mr. Hershey’s lifetime, the Hershey Zoo welcomed animals by donation, including deer, zebus, possums, goats, pheasants, and peacocks. Over the years, the Zoo increased its collection of exotic creatures like monkeys, a lion, tropical birds, baby elephants, penguins, anacondas, and orangutans.

Today, ZooAmerica® North American Wildlife Park includes more than 200 animals native to this continent, from the Southern Swamps to Big Sky Country. Zoology and animal education are essential elements of the Zoo’s vision, and eager animal lovers are offered a chance to go behind the scenes to feed a bear or hold an owl.

Milton Hershey and his wife, Catherine (Kitty), unable to have children of their own, used their wealth to establish a home and school for orphaned boys. The Milton Hershey School, then called the Hershey Industrial School, opened in 1910 and provided a stable home life, rigorous academics, and agricultural and vocational disciplines.

Mr. Hershey established a living legacy to ensure the continuation of his vision long after his death. The generosity and philanthropy of Milton and Catherine Hershey has touched thousands of lives, and their dreams endure today for more than 2,000 kids a year. 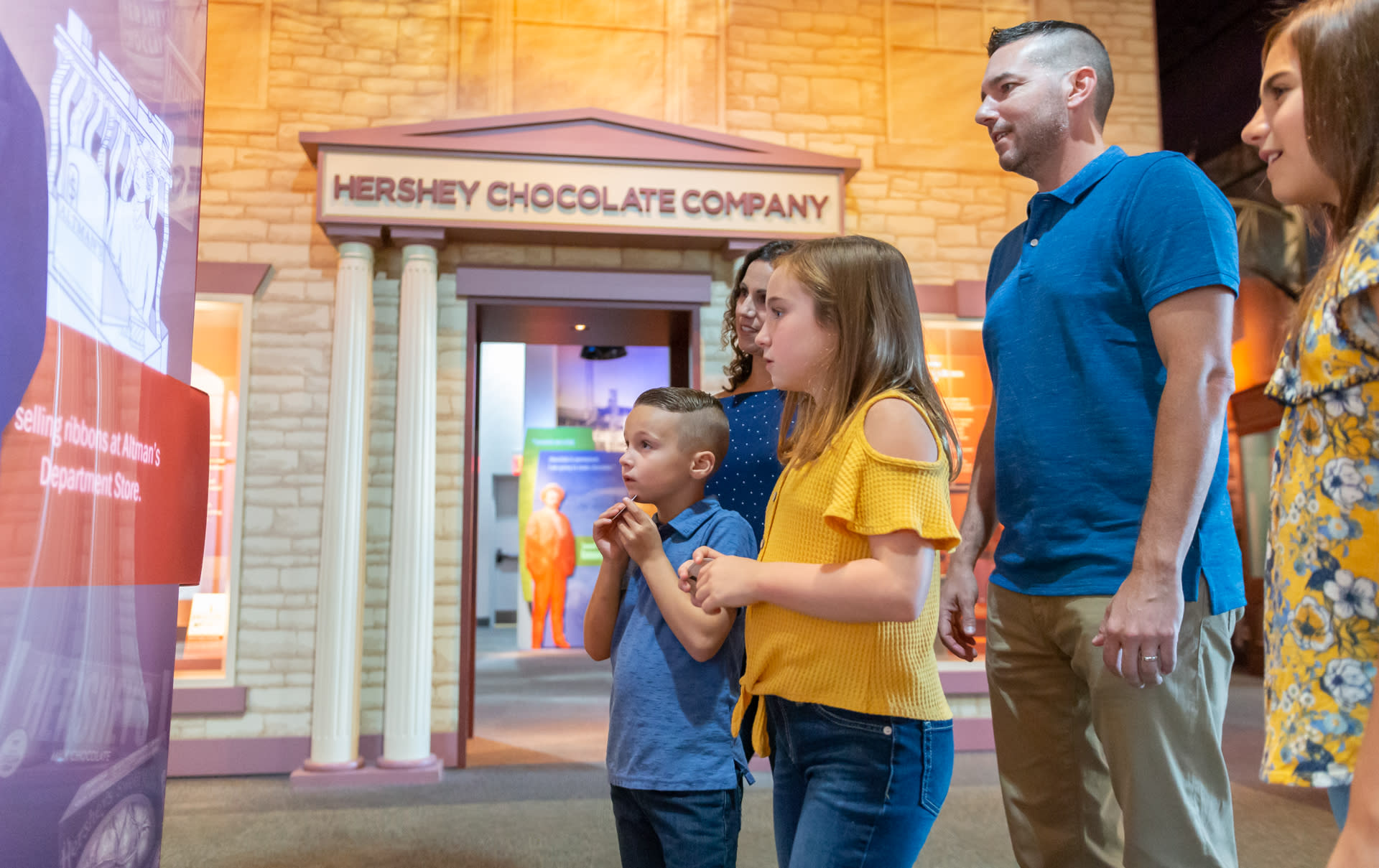 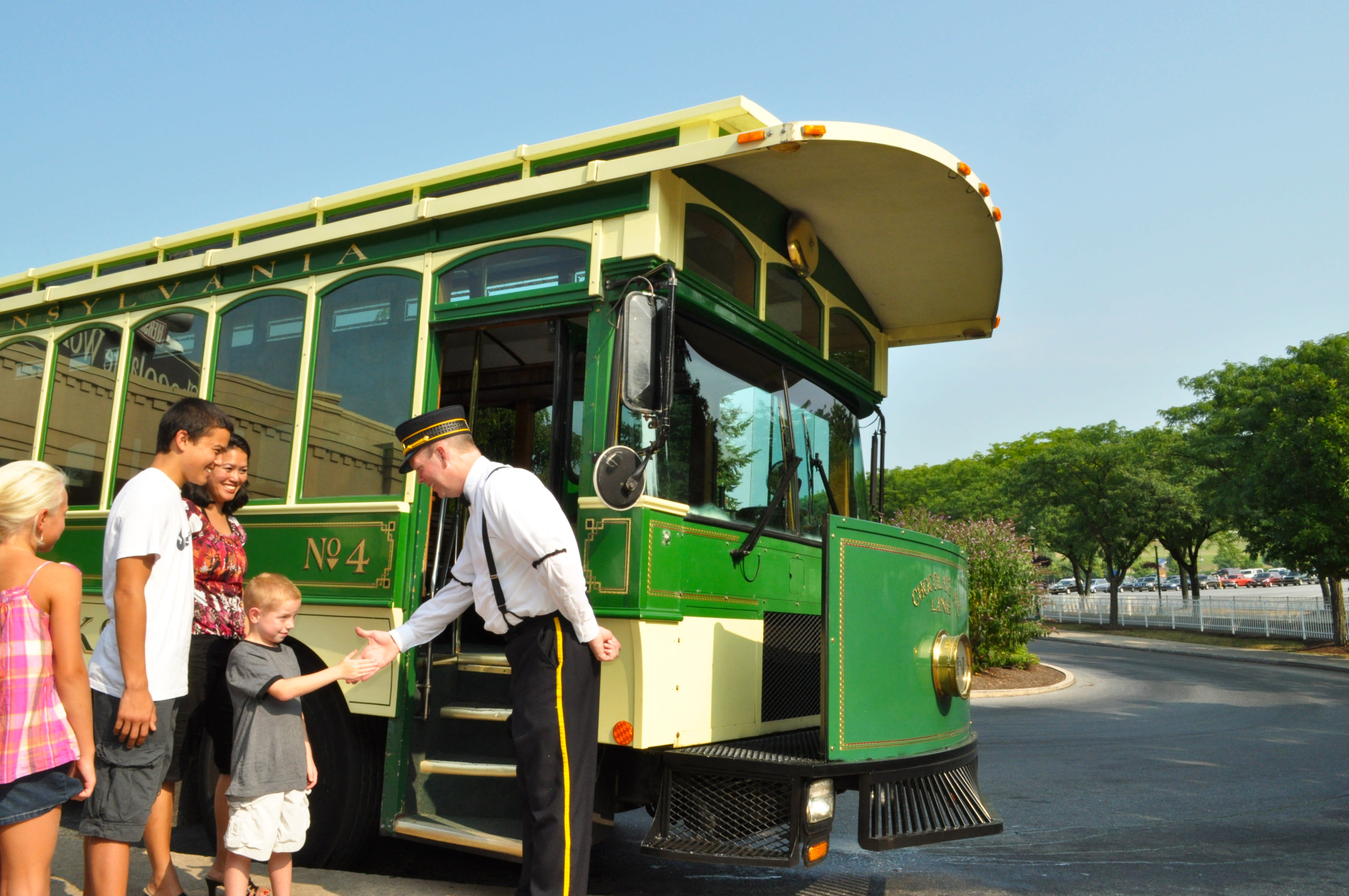 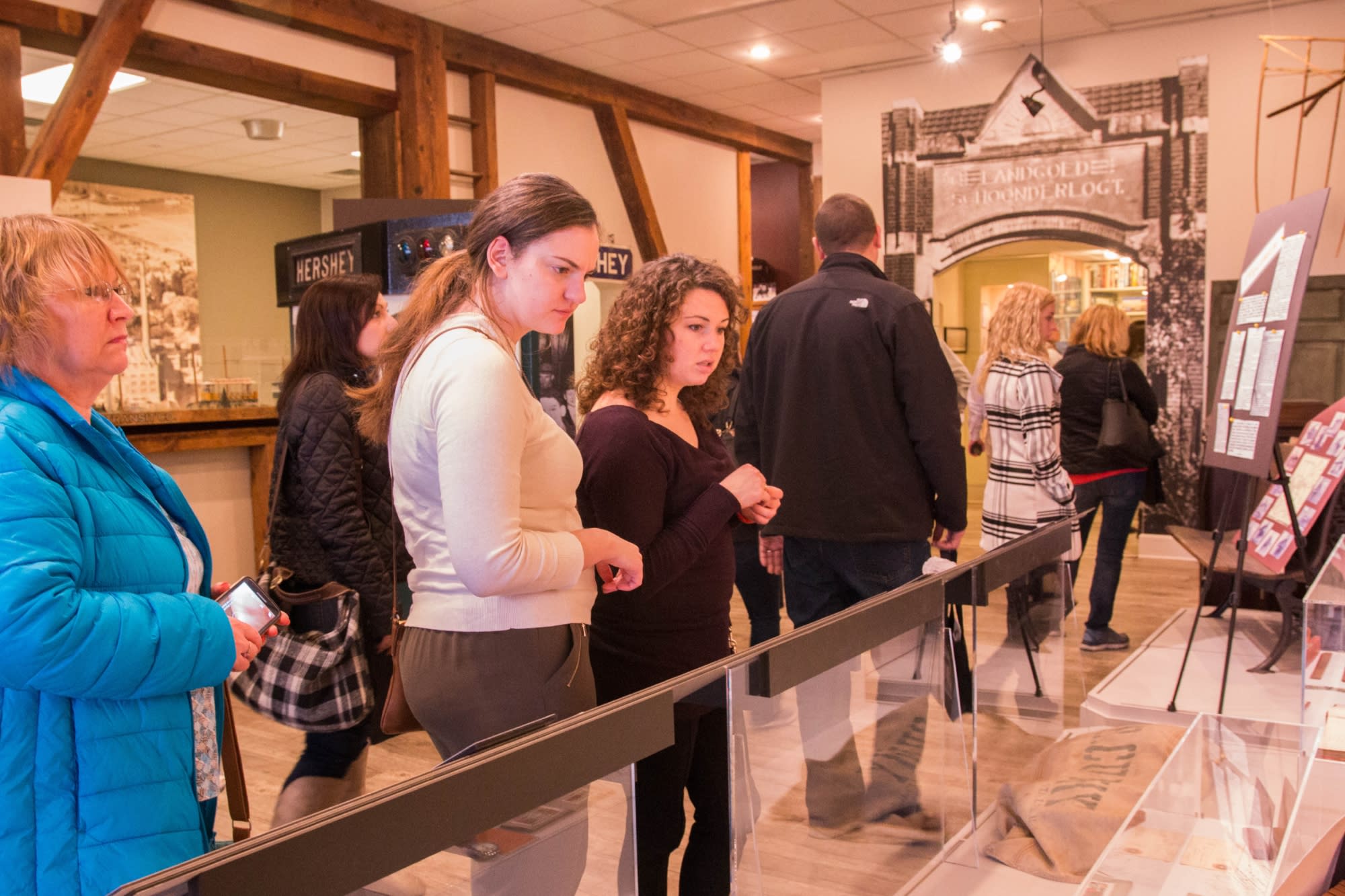